Important Enough To Be On ESPN's NFL Homepage

The new Mercedes-Benz Stadium in Atlanta, home of the Atlanta Falcons and Atlanta United, welcomed 75,000 fans to Super Bowl LIII in a beautifully designed and environmental friendly facility that is devoted to providing the ultimate fan experience. The HOK-designed $1.5 billion stadium opened in August 2017, an architectural icon in the city’s impressive downtown skyline.

“You add a restaurant or a walkway feature to the stadium, some people will use it, but everyone is going to use the restroom. So the functionality, the quantity, the aesthetics of your bathrooms is critical. It seems unremarkable to most people, but, trust me, you invite 70,000 people to your house and you get the bathrooms wrong — you’ve got a huge problem”…”That Toilet seat, is now just as important as your Super Bowl seat.” 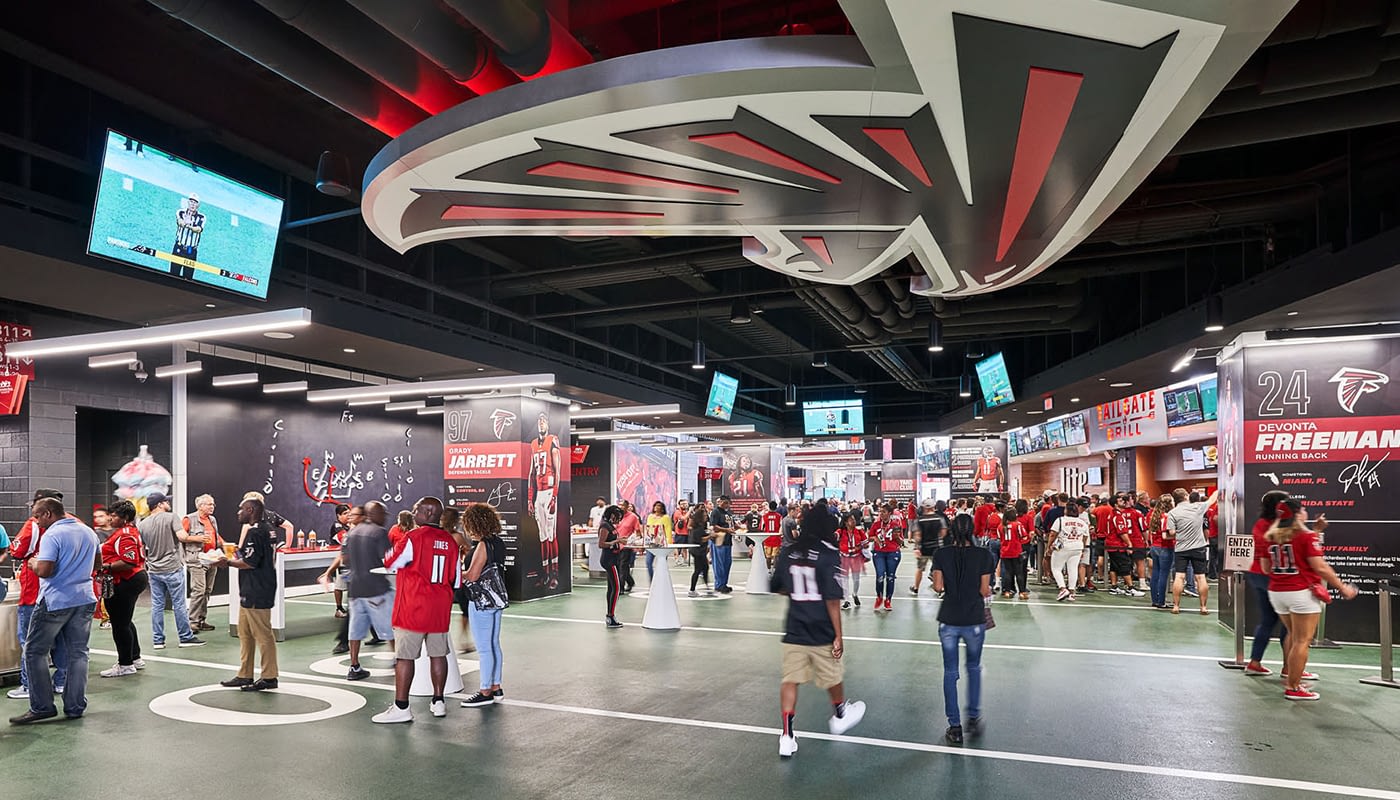 As Fleming reported, another one of his sources, Kathryn Anthony, an architecture professor at the University of Illinois and a board member of the American Restroom Association, described the restroom experience as one that “will make or break a fan’s experience at the Super Bowl.”

ASI Group agrees with Jenkins and Anthony. That’s why the company worked diligently to ensure that the enjoyable experience of the tens of thousands of guests anticipated for each event at Mercedes-Benz Stadium extends all the way to the restroom.

In the ESPN piece, Fleming was particularly descriptive of the Falcon’s “upscale” bathroom. In the article he writes:

“Finally, at owner Arthur Blank’s insistence, the Falcons have also covered every available bathroom wall with 50-inch TVs to keep fans connected to the game at all  times. But it’s the color pallet that remains the most distinctive trait of the Mercedes-Benz bathrooms. The immaculate gray speckled floors, shiny steel and deep red  fixtures, black metallic speakers and unique gunmetal gray walls have transformed the typically institutional feel of the stadium bathroom into something you’d expect to see in  an elegant restaurant or upscale hotel.”

ASI Group is a leader in providing integrated building products for stadium design, and this isn’t their first super bowl appearance. In addition to Mercedes- Benz Stadium, ASI Group’s products have been featured in some of the world’s most prominent stadiums including: US Bank Stadium, AT&T Stadium, MetLife Stadium, Levi’s Stadium, Lucas Oil Stadium and Yankee Stadium. 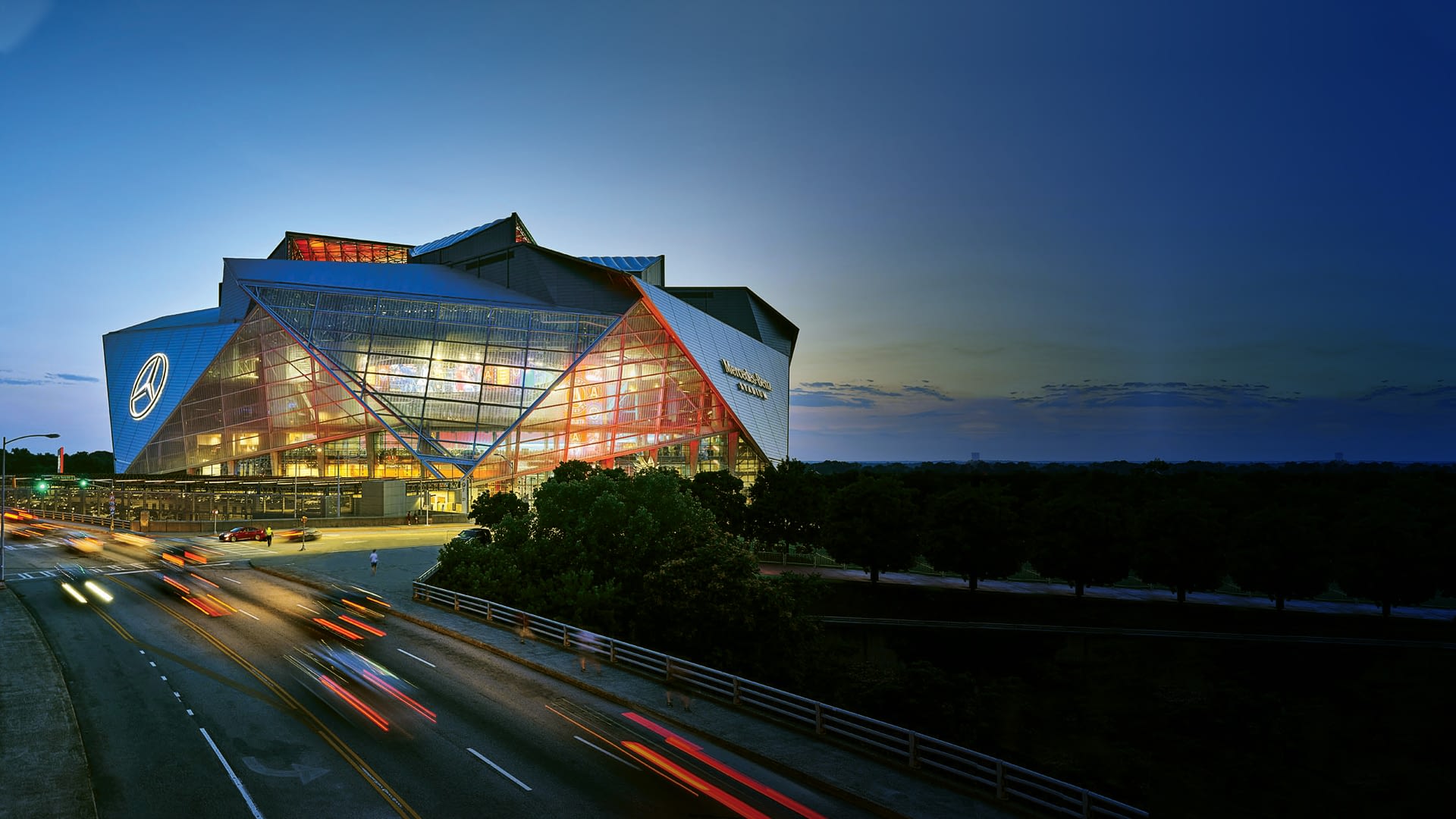 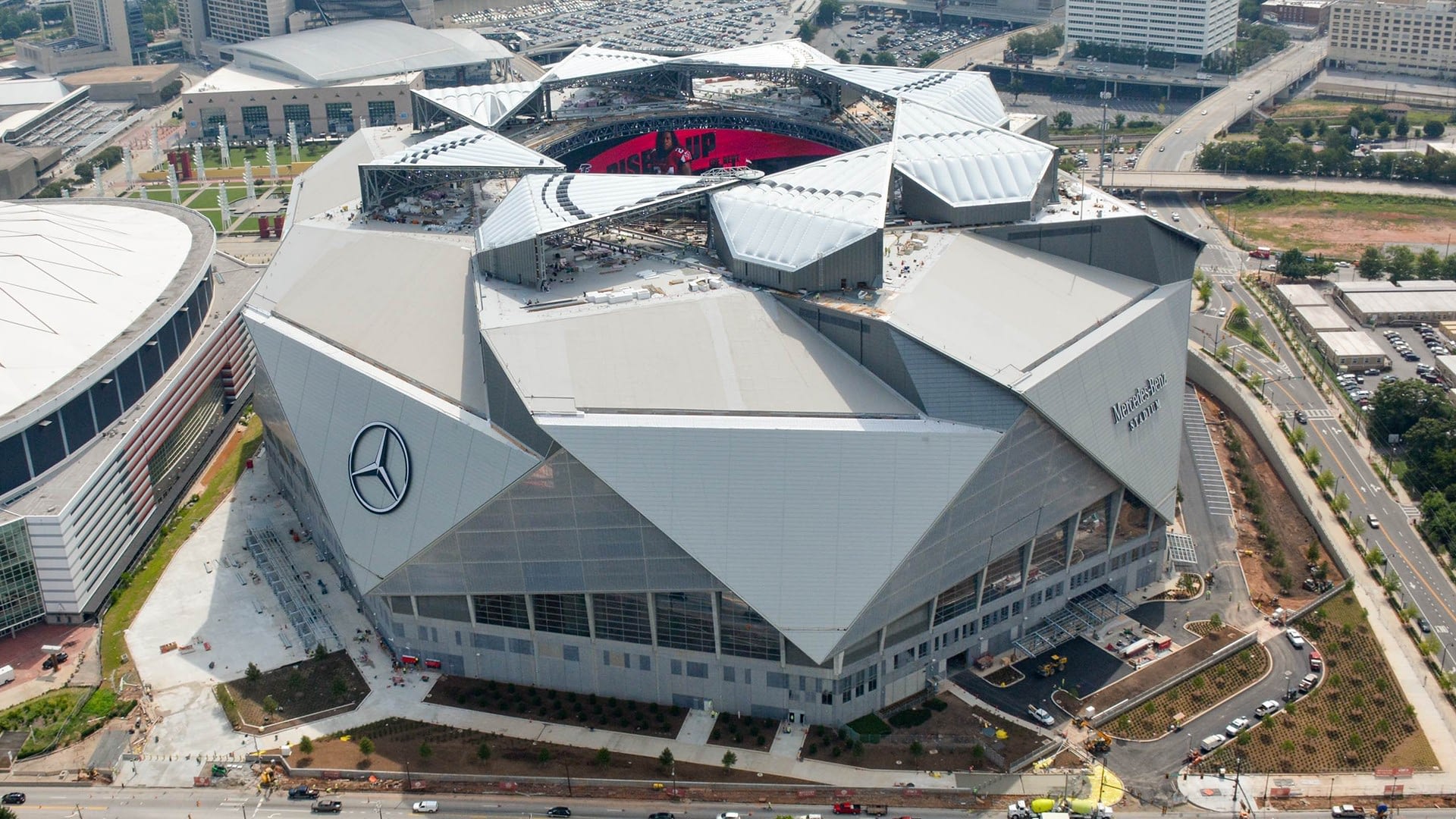 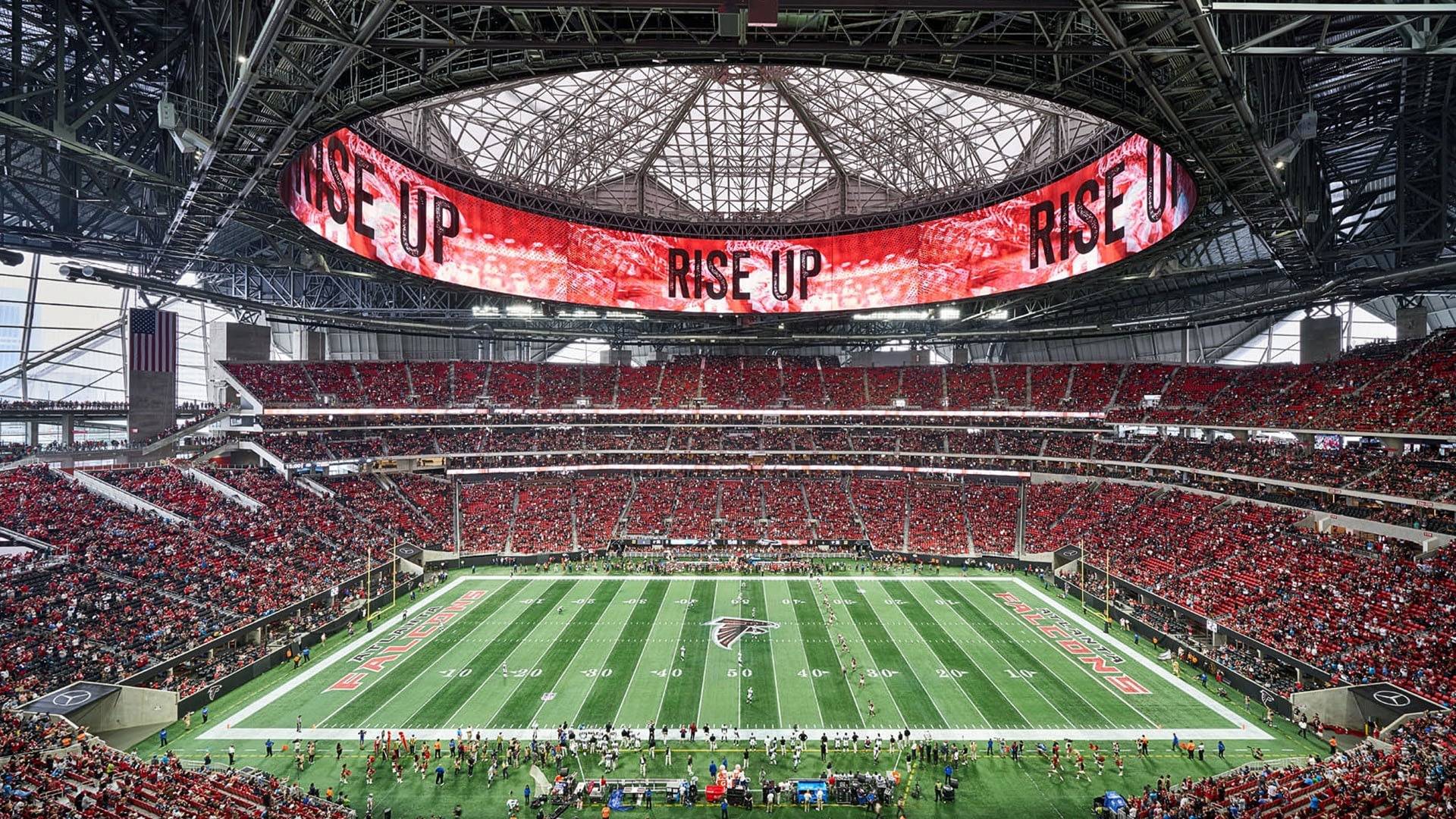 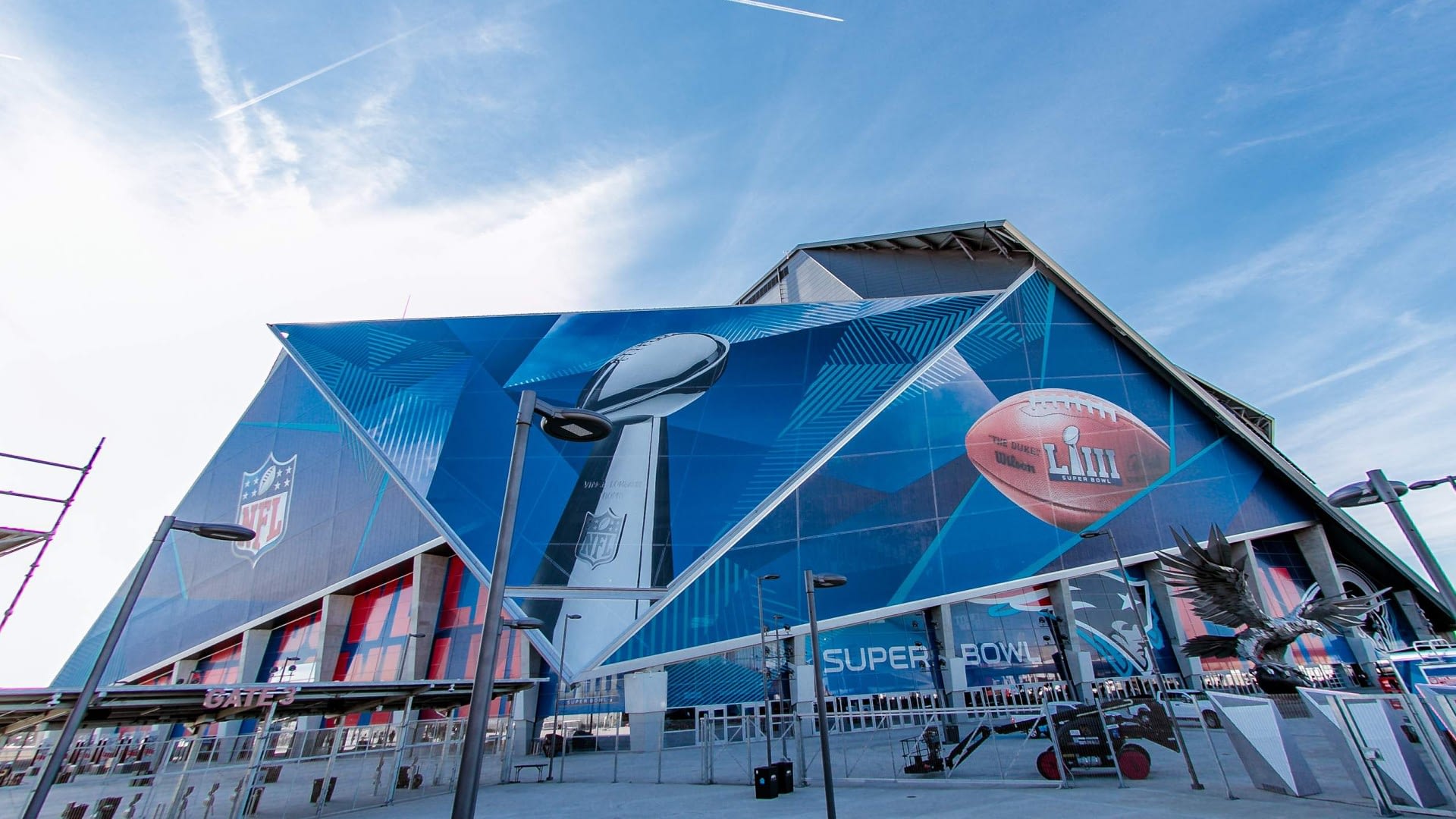 ASI Accurate Partitions reserves the right to make design changes or to withdraw any design without notice.